The International Alliance for Mobility Testing and Standardization (IAMTS) celebrated the official opening of its new global headquarter in Vienna, Austria with a Grand Opening event on October 24 and 25 which included keynotes, panel sessions and technical demonstrations in the context of standardized testing of automated and connected driving systems.

IAMTS was established in April 2019 at the SAE World Congress as a consortium program under SAE ITC (Industry Technologies Consortia) which is affiliated to SAE International, a US-based standards development organization. After gaining critical mass in membership, IAMTS was transitioned into the legal form of an Austrian Association headquartered in Vienna. This transition started in late 2021 and was completed in early 2022. The formal start of the new organization was celebrated with the Grand Opening. In its new configuration IAMTS has four board members covering all major world regions: TÜV Association, SAE International, IEEE and CATARC.

Day one of the Grand Opening

The Grand Opening was kicked off on October 24 by a welcome note from Alexander Kraus, Chairman of the IAMTS Board and Chief Technology Officer of the TÜV SÜD Mobility Division. 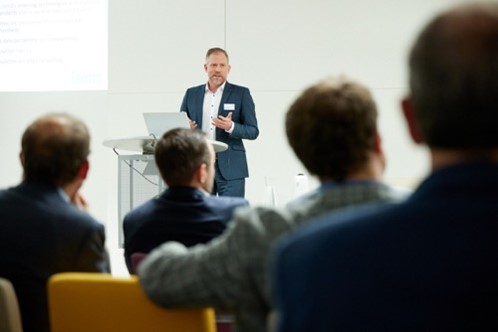 Opening speech of Alexander Kraus, Chairman of the Board of IAMTS

Alexander indicated in his speach the need to standardize CAV scenarios across major geographical regions, match evolving technologies to develop automate driving systems with standards in a timely fashion and to agree on capabilities that are most relevant for cyberphysical testbeds to achieve regulatory compliance.

It was a big honor for IAMTS that Stephen Welby, IEEE Executive Director & COO, gave a welcome presentation where he highlighted the role of IEEE in standardization and innovation in general and the role of the IEEE Standards Association (IEEE SA) in particular. With respect to IAMTS, one of the focus areas of IEEE SA is mobility, especially safe autonomous driving. The audience also learnt about the personal background of Stephen in the DARPA Grand Challenge initiative (first organized in 2004) which is considered to be the starting point of the commercialization effort of autonomous driving where he served as safety officer. 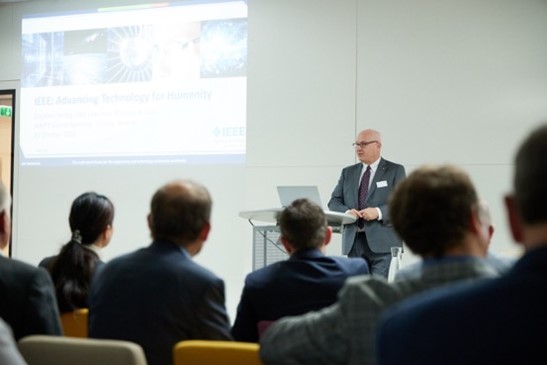 Helmut Augustin, Head of the Coordination Unit for Digitization, Urban Development and Planning, Section Mobility Strategies from the City of Vienna gave a keynote about how the City’s response to Automated Mobility looks like. He highlighted that AV services should complement and not compete with public transportation and that AV services could be in particular very useful in peripheral areas of the city and tangential connections between major routes of public transportation. He explained that AV’s need to prove that they can be operated safer compared to human drivers and that they need to be able to operate in mixed traffic, especially with pedestrians and bicyclists. 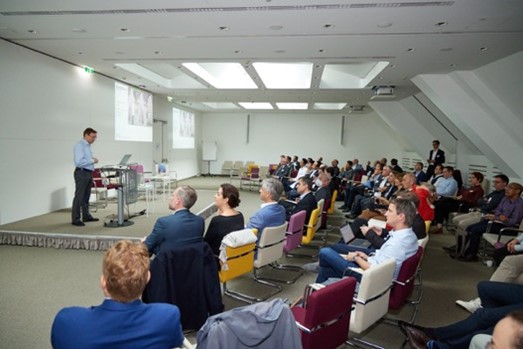 Claudia Braun and Dr. Sebastian Siegl from AUDI AG, a strategic member of IAMTS, gave an interesting joint keynote about “Challenges and Opportunities of Highly Automated and Fully Automated Driving in a Global Context”. A major concern is the regulatory framework for highly and fully automated driving which is definitely not harmonized from a global perspective and where Audi sees an important area to act and where it follows UNECE guidelines for verification and validation for automated driving. Audi provided a deep dive into SOTIF (Safety Of The Intended Functionality) to explain how hazards of automated driving can be minimized to an acceptable level addressing both known and unknown potentially hazardous behavior resulting from false positives and false negatives. With respect to standardization in context of autonomous driving Audi pointed out that driving scenarios (including description formats and data exchange mechanisms) need to be standardized to achieve regulatory compliance and testbed interoperability. The V2X test infrastructure needs to be standardized as well as public infrastructure design features. 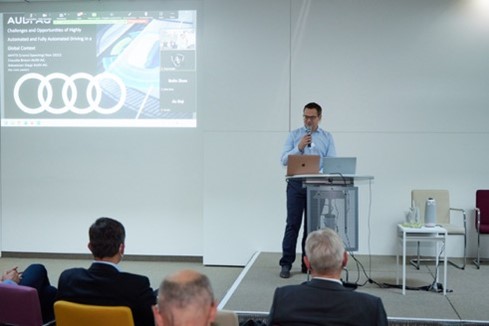 The meeting center of Austrian Standards in Heinestrasse 39, 1020 Vienna, the new home of IAMTS, provided ample opportunities to network for the physical participants of the Grand Opening Event. 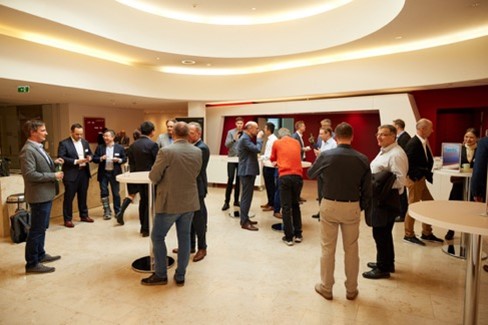 Prof. Huei Peng, Founder of Mcity, the world’s first purpose-built proving ground to test performance and safety of connected and automated vehicles and technologies under controlled and realistic conditions, Benjamin Koller, Head of Safety and Regulation of Highly Automated Driving at TÜV SÜD representing TÜV Association and Guanqi Hao, representative of CATARC (Chinese Automotive Technology & Research Center) came together in a panel to discuss how to further develop the regulatory compliance process for CAV’s from the view from different continents. Prof. Peng explained how in his opinion behavioral competence can be tested in context of L4 systems where the overall process follows a common scheme but regional differences are being considered. Benjamin Koller provided insight in the German approach how to approve L4 vehicles and Guanqi Hao highlighted the overall policy process approach in China for L2-L4 enabled vehicles. All panel lists agreed that IAMTS can play an important role to develop better mutual understanding for commonalities and differences in the regulatory compliance processes and their further developments.

Mihai Nica, Head of ADAS/Autonomous Driving and Connectivity from AVL, Sushanta Das, Technical Director of the American Center of Mobility and Tuan Duong Quang, ADAS/AV product manager of TÜV SÜD who also leads the IAMTS Workgroup “Global Advanced Mobility Testbeds) joined for a panel to discuss how to prepare CAV testbeds for the future both virtually and physically. Mihai Nica gave an overview about the complete verification & validation framework from the virtual to the physical side end-to-end and explained how the efforts are shifting from right to left to reduce cost and development time and increase system knowledge about the product earlier. This was confirmed by Sushanta Das as he showed with concrete examples how ACM is accelerating the validation process and reducing physical validation efforts through the use of cloud-based simulation tools and digital twins. Tuan Duong Quang explained the need to develop a certification scheme for cyberphysical testbeds via IAMTS which would open the door towards testbed interoperability as requested in Audi’s keynote and as a means to develop trust on the regulatory side how trustworthy test data to be considered for regulatory compliance is actually generated.

Finally, Georg List, Chair of the IAMTS Technical Leadership Committee (TLC) and Vice President Corporate Strategy of AVL, together will Hermann Brand, Board Member of IAMTS representing IEEE and European Standards Affair Director for IEEE summarized the findings of the keynotes and panels of the day and gave an overview about the WIP (work in progress) of the different IAMTS working/study groups. 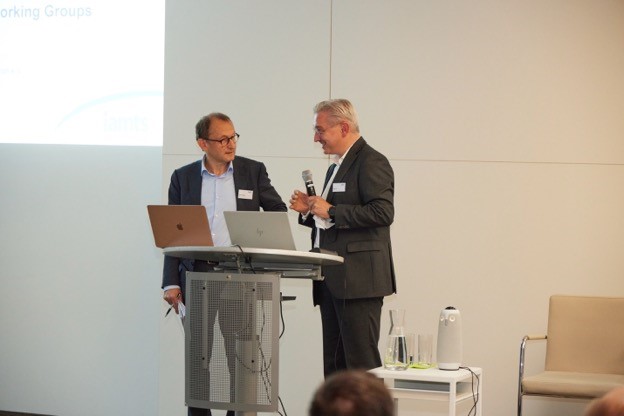 Hermann Brand (left) and Georg List (right) summarized the findings of the keynotes and panels of the day and gave an overview about the work in progress.

Day two of the Grand Opening

On October 25 the IAMTS Grand Opening continued at the Hafen Wien with a warm welcome note from Doris Pulker-Rohrhofer, Managing Director of Hafen Wien at the smart urban logistics lab of Thinkport VIENNA at the Freudenauer Hafenstrasse 18, 1020 Vienna, to provide an overview about the port facility which operates on an area of about 300 hectares in the center of Vienna next to the Danube river. 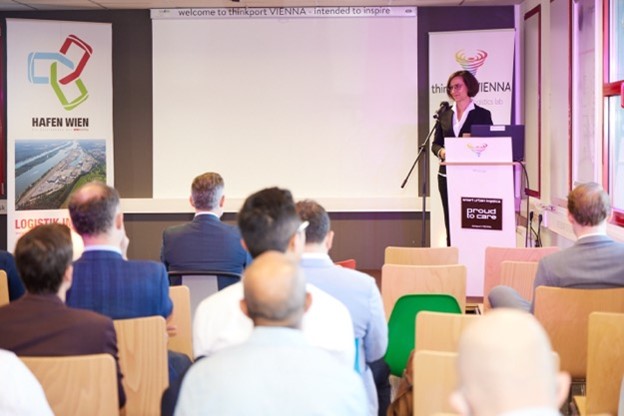 The highlight of the day were the technical demonstrations which were provided by KONTROL, AVL, 4activeSystems and Virtual Vehicle which are all IAMTS members.

KONTROL is an Austrian start-up company which is specialized to consider local traffic regulations in the regulatory compliance process of automated driving systems. Traffic rules are typically defined as legal texts which need to be translated into technical requirements and ultimately in technical specifications. The KONTROL tools can generate technical requirements from law texts, can validate the compliance of traffic regulations in a simulation environment and monitor the compliance during operation of the physical vehicle in real-time.

AVL which is headquartered in Graz, Austria, is the world’s largest independent company for the development, simulation and testing of powertrain systems, their integration into the vehicle as well as new fields like ADAS/AD and data intelligence. In the demo the AVL SCENIUS™ safety assessment framework was presented as an end-to-end solution for scenario-based ADAS/AD verification and validation. It supports the complete process from scenario design to scenario management, test case generation, validation strategy, result reporting and safety argumentation.

4activeSystems is an Austrian-based market leader in the segment of advanced testing technologies for active vehicle safety. It presented a realistic live scenario to showcase a V2X platform and a VRU (vulnerable road user) dummy to validate the ADAS capability of a test vehicle.

Virtual Vehicle Research GmbH is Europe’s largest research center for virtual vehicle development in the automotive and rail domain, headquartered in Graz, Austria. It presented a L4 enabled test vehicle which was operated by a safety driver, and which was able to dynamically calculate trajectories on the test area based on sensor input utilizing an open source AV system development platform. 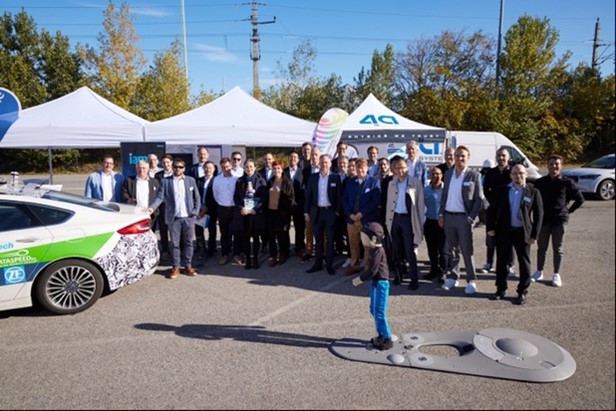 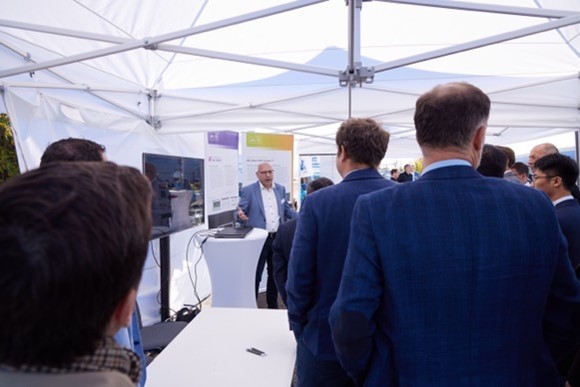 The Grand Opening Event continued after the technical demonstrations with presentations from WG2 (Global Advanced Mobility Testbeds) and WG4 (Cybersecurity testing) to highlight some key activities and results from those IAMTS workgroups. 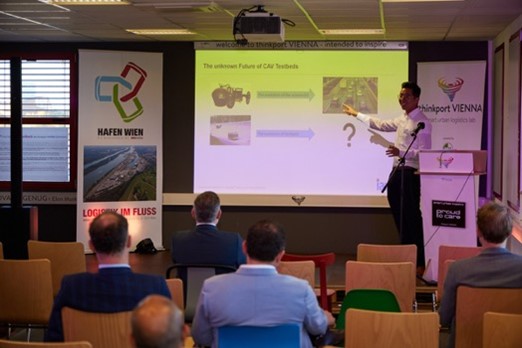 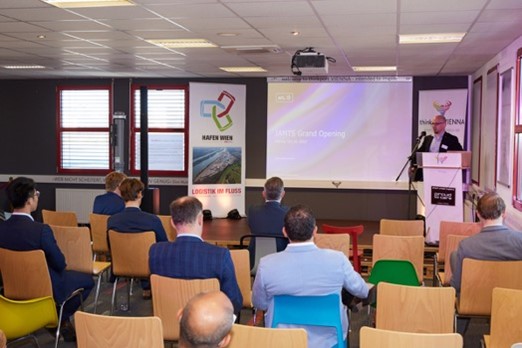 To close out the IAMTS Grand Opening, Alexander Kraus, Chairman of the IAMTS Board, gave his farewell note to the participants. 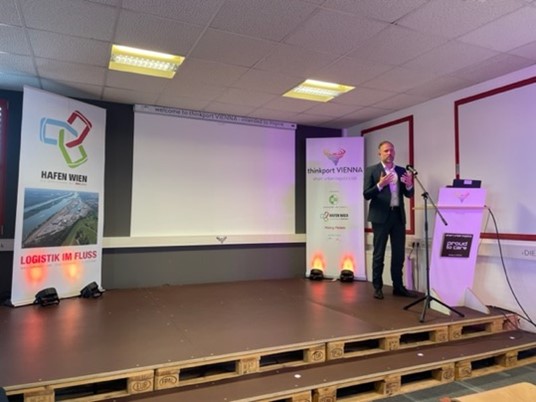 Alexander Kraus, Chairman of the Board of IAMTS, closing the event